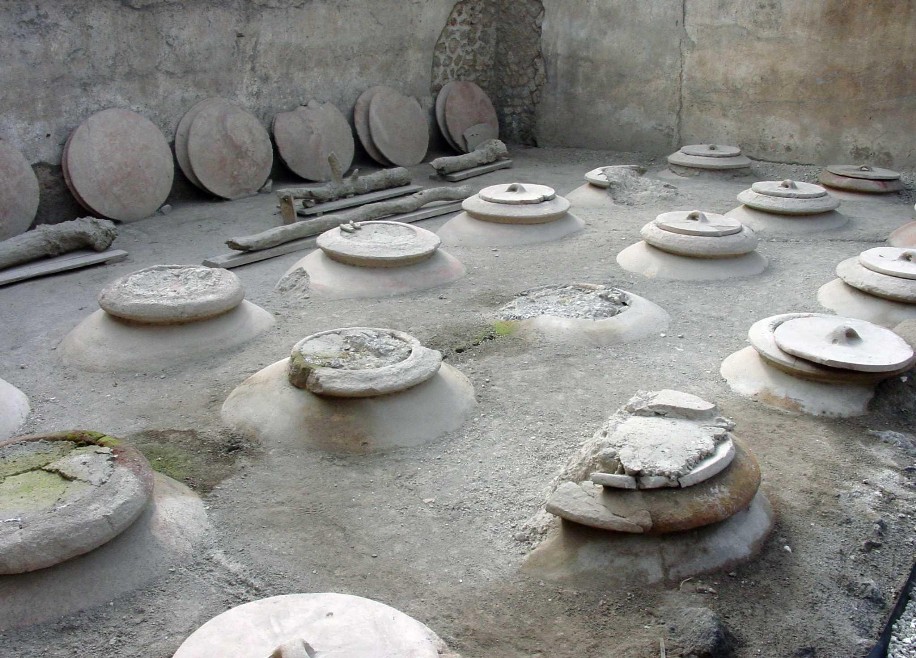 The excellent Antiquarium at Boscoreale (adjacent to the excavations of the Villa Regina), which explores the relationship between people and their environment in the Bay of Naples in Roman times. A wonderful range of the carbonised organic remains from Herculaneum and other sites is on display. The displays at the Antiquarium at Boscoreale, opened in 1991, are entitled Man and Environment in the Vesuvian area. They comprise two large rooms, the first of which looks at the various environments in the Bay of Naples - The Sea and Coast, The Plain, The Foothills and Mountain of Vesuvius. Organic matter preserved at Pompeii, Herculaneum and other excavated sites are displayed, such as carbonised fruit stones, bread, fish-bones, basket-ware, and compared with other evidence such as wall-paintings, mosaics, contemporary written accounts, tools and vessels. Thus a picture is assembled of how the people living in Campania during the 18t century AD used their abundant local resources to provide for their needs.
The second room contains displays devoted to the many prosperous working villas which once dotted the hills north of Pompeii, and were destroyed by the eruption of AD 79. Many have been excavated from the 19th century on, and were found to contain wealthy private . possessions, as well as agricultural artefacts.
The rather obscure situation of the Antiquarium results from the proximity of one of these farms, the Villa Regina. It was discovered in 1977 when the surrounding housing estate was built, but is not yet properly open to the public. Visitors can only look down into the remains of the building from the present ground level. The villa had an extensive wine cellar, containing 18 dolii for fermenting wine, and an adjoining wine press. Finds, including the plaster cast of a pig, are displayed in the Antiquarium.