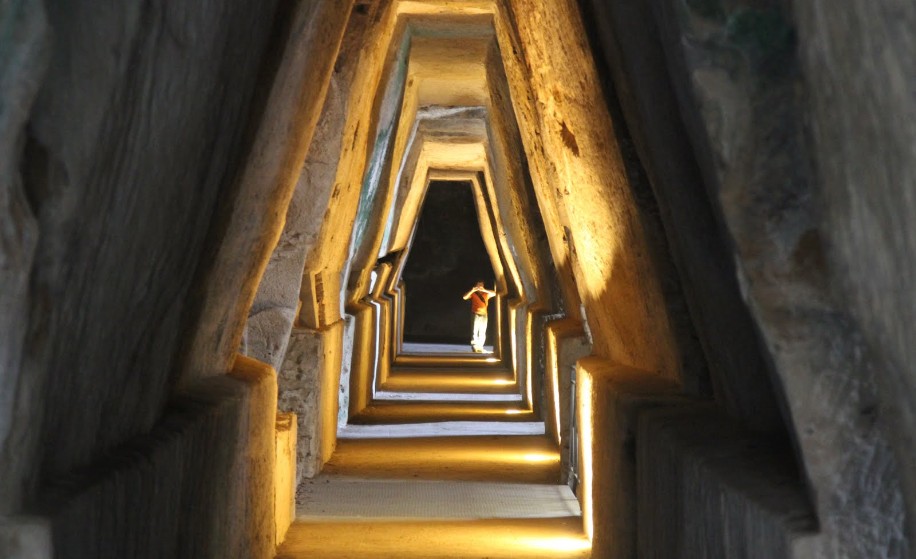 A Greek colony, Kyme, founded here c750 BC, was probably the first on the Italian mainland. Its strong acropolis, naturally defended by sea, woods, mountains and lakes, attracted settlers from various parts of the Greek world, and the city became powerful. It was the focus of opposition to growing Etruscan power in Campania, and the Cumaeans inflicted two crushing defeats on the Etruscans in 524 BC and 474 BC. Very little of the Greek acropolis has been excavated. Two temples, to Apollo and Jupiter, originated in the 6 th century BC, but were much altered during Roman times, and later converted into Christian churches.
In 421 BC Cumae was taken by the Samnites, and in 338 BC by the Romans. The city became prosperous in Roman times, and the forum and capitol have been revealed beneath the acropolis hill. During the lst century BC Agrippa buìlt the Crypt of Cocceius (Grotta di Coccaeio), a road tunnel to the harbour at Lake Avernus. The Cripta Romana near the acropolis almost certainly represents its last stretch.
In AD 95 the Via Domiziana was built to link Neapolis, Puteoli, Cumae and, ultimately, Roma. The Arco Felice also dates from this time. Its brick-built, barrel-vaulted structure spans a deep cutting made through the hill, and supports three arches for a viaduct above
Cumae was important from at least the 6th century BC as the home of the Cumaean Sibyl. Her powers of prophesy and divination were venerated well into Roman times. In the late lst century BC Virgil descríbed her cave in Book VI of the Aeneid, where Aeneas consulted her before descending to the underworld to speak with his father, Anchises. It perhaps survives still -
'a vast cavern, a hundred entrances and a hundred tunnels lead into it through which the Sibyl 's oracle emerges in a hundred streams of sound'.