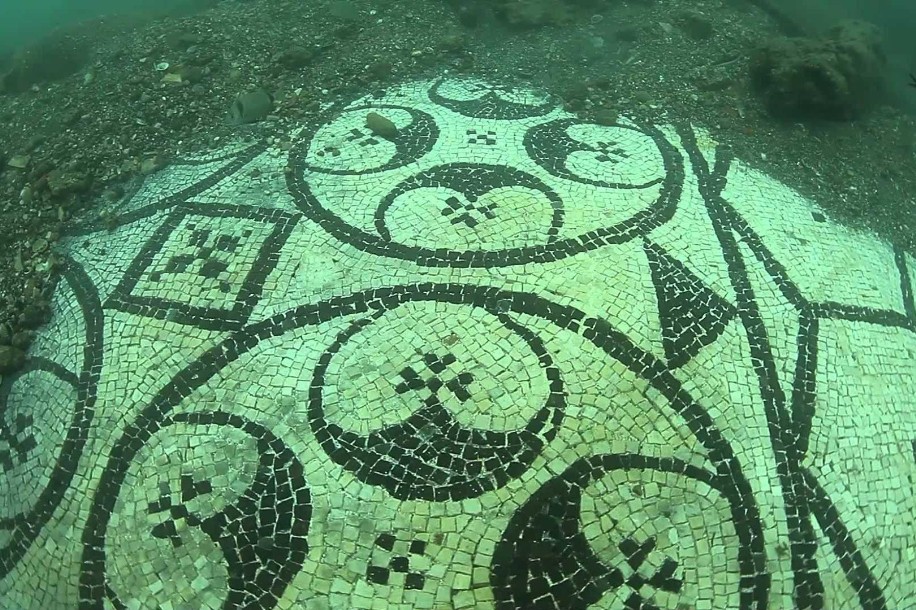 There is evidence of early Greek occupation at Baiae, but it was during late Republican and early Imperial times that it achieved its greatest wealth, fame and notoriety. Its therapeutic springs and mild climate made it the most famous spa in Italy, and Sulla, Pompey, Julius Caesar, Tiberius, Nero and Cicero all had luxurious holiday villas here.
The Satyricon of Petronius was a satire on the excesses of life hereabouts, and what we know of the reality seems to support the fiction.
Bradyseism, together with subsidence, mean that most of the palatial Roman residences of Baiae are now under the sea. The most substantial remains comprise a multi-level thermal bathing complex built into the wall of an ancient volcanic crater on the slopes of Sella di Baiae. Some of its foundations date back to the 6th century BC, but much of it belongs to the 2nd century AD. Three huge domes mark the sources of the springs, and residential rooms occupy the terraces together with nymphaea, theatres  and  pools. The area around the Cumaean peninsula and the Gulf of Pozzuoli was the most important centre of thermo bathing in antiquity. Volcanic activity close to the surface produced hundreds of hot mineral springs, and their potential for healing and for pleasure was exploited to the full by the Romans.