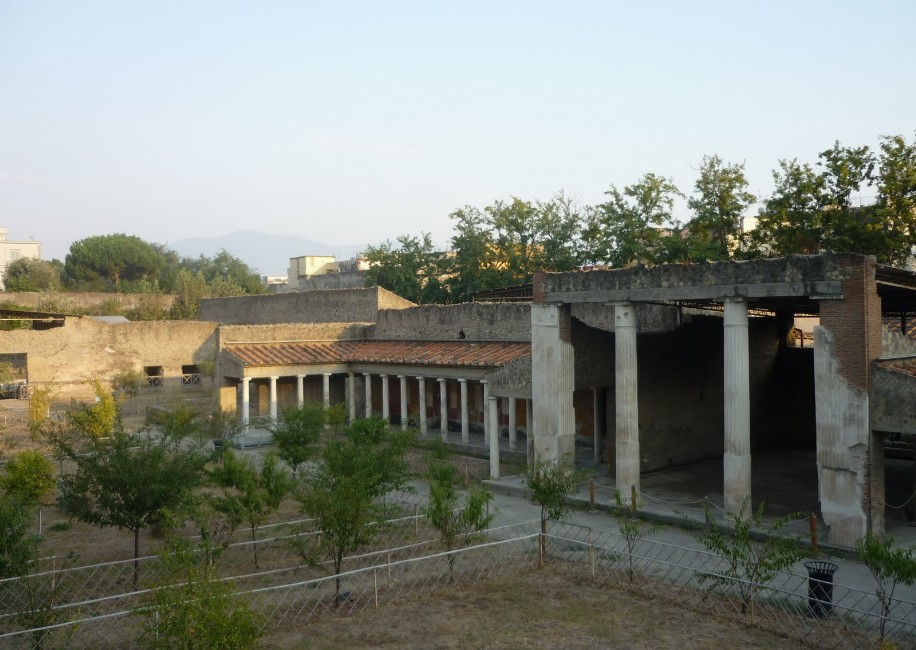 The opulent villa at - Oplontis, whose ownership is tentatively attributed to Nero's wife, Poppaea. Hidden until the 1960's beneath the modem n streets of Torre Annunziata, and excavated using relatively modern techniques, it is now possible to wander from room to room gazing at a stunning sequence of wallpaintings, all left in situ.  The site of Roman Oplontis has long been known from the Peutinger Table, a medieval copy of a 4th century road map. Its position, three miles from Pompeii and six. from Herculaneum, is marked with a square and two towers, the symbol used for thermal baths or villas. The exact location of the site on the ground was not known until relatively recently.

Work during the 183Òs produced finds of Roman date, but it was not until 1964 that systematic excavation began under the supervision of Naples and Caserta. A magnificent villa began to emerge from a covering shroud nearly 7m deep, comprising 1.8m of lapilli (small stones) and ash, and 5m of mud. Excavation and restoration continue, today. The discovery of another villa nearby in 1974, has led to the suggestion that this was not an urban centre, but a holiday resort zone for the rich, comprising vast suburban villas enjoying seclusion and luxury. At a later date the east wing and the portico on the northern side were added, providing the characteristic colonnaded facade so popular along the coast.

More than ninety rooms have so`far been revealed, many with beautiful wall paintings.

Detailed excavations of the twelve gardens within and around the villa have been carried out since 1974 by Wilhelmina Jashemski. The original positions of plants, flower beds and trees have been identified, and often enough evidence has survived to recognise individual species. It seems likely that by the early lst century AD it was the property of the wealthy Poppaea family. Other houses in Pompeii itself are known to have been theirs, including the House of Menander and the House of the Golden Cupids. Some would identify the owner as the most infamous of the clan - Poppaea Sabina, wife of the Emperor Nero - `a woman of surpassing beauty but licentious morals'.
She was killed by her brutal husband in AD 65, several years before the eruption buried the villa in AD 79. The last owners were not present when the disaster occurred, and no human remains were found here. The building was being refurbished, presumably as a result of extensive earthquake damage suffered in AD 62. The furniture had been removed for safe-keeping, and stacks of building material have been discovered, still awaiting use. The illusion of depth has been achieved. The use of building and trees in the background plus tripods, gates and animals at various depths in the middle ground all help to create the illusion than the columns are in front of the of the wall.