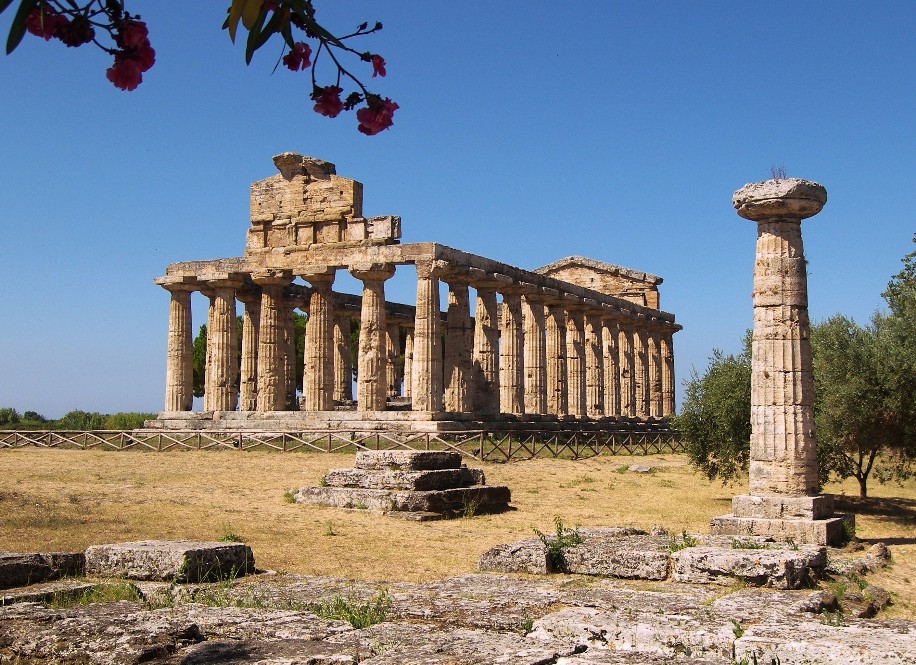 The Greek city of Poseidonia was founded towards the end of the 7th century BC on land which had already been occupied in prehistoric times. The city became a trading centre, grew rich, and was defended by strong walls. Two magnificent temples, dedicated to Hera and Athena, were constructed • during the 6th century BC, and another sanctuary to Hera, situated 9km to the north at the mouth of the River Sele (Foce del Sele ),ates to the same period.
Devotion to Hera remained strong during the 5th century BC, when a second temple was erected to her within the city, close by the first. At this period the agora was built, with a bouleterion (council chamber). Sanctuaries and cemeteries were again constructed outside the walls, and the latter included a rare painted tomb, the so called Tomb of the Diver, dated to about 480 BC.
Poseidonia was not spared the expansionist ambitions of the Samnites (called Lucanians in this region), and in c 400 BC the city was taken. This appears to have resulted in a fusion of ideas rather than a conquest, as much continued as before - the city name, the coinage, the use of the bouleterion, and worship at the Greek temples and sanctuaries. Lucanian painted tombs of the 4th and early 3rd century BC have been found on all landward sides of the city.
Major change came about as a result of Roman expansion. In 273 BC a Latin colony was planted, and the city's name changed to Paestum. Much building work in the Roman style
followed - the cardo and decumanus, forum, comitium, amphitheatre and domestic housing. Further temples were built, but veneration of the Greek sanctuaries continued.
For a while Roman Paestum prospered, but environmental damage began ' to take its toll. The felling of nearby forests eventually led to soil erosion, and silted up the rivers. Gradually the site became more and more malaria!, and the population diminished from the lst century AD onwards.
By the 4th century AD social decline was obvious. Refuse pits were opened in the forum itself, and some houses had been converted to limekilns. By the 5th century the Temple of Athena, situated on the highest point of the landscape, had been converted to a Christian basilica, and what habitation there was clustered around it. A second church was built nearby, and by the end of the 6th century there was a diocese at Paestum. Soon, however, most of the population moved to the hills and settled at Capaccio Vecchio.
Count Gazzola, a dignitary of the Neapolitan Court, announced the `discovery' of the ancient temples in the mid 18th century, but no real archaeological was done until the early decades of this century. Work continues to the present day, summarised in a recent book by John Griffiths Pedley (Paestum - Greeks and Romans in Southern Italy, Thames and Hudson, 1990).